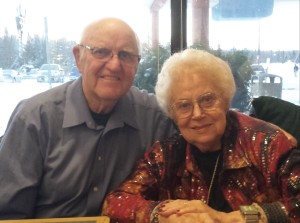 Carl Weisinger, age 87, of Mass City peacefully passed away on December 12, 2020 at D.J. Jacobetti Home for Veterans in Marquette. He was born on December 14, 1932 in Ontonagon to Lucille and William Weisinger.

He married Phyllis Kangas on November 27, 1954 and they raised their five children on East Branch Road in Mass City. As a family they enjoyed many camping and swimming trips, family vacations, snowmobiling, Thanksgiving at Pine Lodge, family and friends’ birthdays and anniversaries and many Holiday celebrations.

Carl proudly served his country during the Korean War in the US Army. He was a lifetime member and Commander for several years of the VFW Post 4167 in Mass City. He was honored to be a member and serve alongside his Veteran friends.

Carl worked construction and logging most of his life and owned and operated Weisinger Logging for many years. He was a hardworking man and true outdoorsman. He loved his family and friends, hunting with the guys at Pine Lodge, riding his four wheeler, working with his bulldozer, taking a ride with Phyllis and enjoying a picnic at their favorite spot on the shores of Lake Superior and spending time with their children and grandchildren. Time at Pine Lodge and partridge hunting with Phyllis was cherished time for both of them. They were both loved by many and will be greatly missed.

He was preceded in death by the love of his life and wife of 62 years Phyllis; two infant babies; his parents; in-laws; sister and sisters-in-law; brother-in-law; and great grandson.

Due to COVID-19 restrictions, a memorial service will be scheduled for a later date.

The Cane Funeral Home is assisting the family with arrangements.

The family would like to thank the staff and volunteers of the Jacobetti Home for Veterans for their care and compassion.

Rest in peace Dad, reunited with Mom. We love you and will miss you.