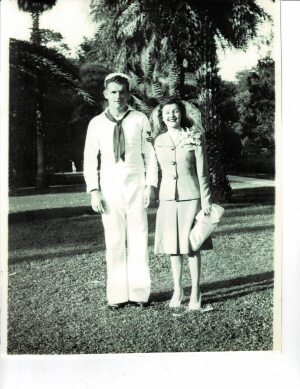 Erma was born in Ontonagon October 28, 1924 to Talcott and Grace Chamberlain. She grew up on the family farm on the Norwich Road, Ontonagon, Michigan. She had two sisters Gladys and Edith and one brother Austin; all three deceased.

She attended the Ontonagon schools graduating with the class of 1942.

Erma was the personification of the "Greatest Generation". Upon graduation from high school, she left home at age 18 and traveled to Traverse City where she earned her certification as a welder. She worked in the Ford plant in Detroit welding on Army tanks and later traveled to San Pedro, California where she worked welding on Liberty ships.

She married Warren H. Millard on June 6, 1944 (D-Day) in Jacksonville, FL. When WW ll ended, they moved back to Ontonagon since Warren also grew up here. He worked at night marshal of the village, later chief of police and then village manager for many years. He passed away in 1983.

They raised four children Warren James, Patrick, Rosemary (DeHut) and Michael. Erma is survived by her children, nine grandchildren, and sixteen great grandchildren. All attended her 95th birthday party which was a grand celebration.

Her sense of adventure fueled traveling and exploring with her family and friends. Her suitcase and her passport were well worn with entry stamps from Greece, Israel, Ireland, England, France, Germany, Belgium, Venezuela and Mexico.

During the summer, Erma's camper at the township park was the scene of many picnics and family gatherings. She enjoyed the beauty of Lake Superior and the many campfires and overnights with her grandchildren and many friends.

Erma was very proud of her apple orchard and bountiful vegetable gardens. Many in the community benefited from her fruits and vegetables. Her email address was actually "appleerma". She took pride in showing her family how to plant and manage a garden and enjoy the fruits of nature.

A memorial service will be held later in the summer when the family will gather.

Cane Funeral Home is assisting the family with arrangements.

Memorials may be given to the Ontonagon United Methodist Church where she was a member for 90 years. The address is 109 Greenland Road, Ontonagon, MI  49953.

To send flowers to the family or plant a tree in memory of Erma C. Millard, please visit our floral store.

You can still show your support by sending flowers directly to the family, or by planting a memorial tree in the memory of Erma C. Millard